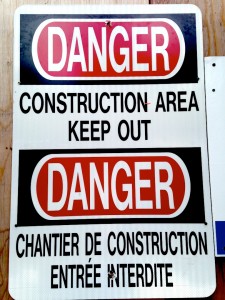 Working at a large public corporation, I was subject to pretty stringent confidentiality rules. We had clean-desk policies – any document was locked up at night in our filing cabinets. Some documents that my team and I worked on were treated even more carefully at any time of day – strategic plans, board reports, financial analysis, and other sensitive files would be kept turned over on our desks, delivered to others by hand, printed only on personal printers vs. shared machines. All sorts of security procedures, mandatory training, and surprise audits reinforced these practices.

And still, I always maintained that if someone were to print off our entire strategic plan, walk across the street, and hand it to our competitors, it would have had pretty much no effect.

(Note for the lawyers: All purely hypothetical.)

That’s because real competitive advantage isn’t about words on a page (or even lines of code); it’s about how you build your organization around those words, make them mean something. (Even straight financial numbers don’t mean much of anything without the interpretation around them.)

But if you’ve seen The Social Network, you already know the quote: “If you had invented Facebook, you would have invented Facebook.” Very little of the information that’s truly proprietary actually makes a difference outside the organization in which it’s being put to use.

An idea on its own is almost worthless. It’s the act of bringing the idea to life (which of course means many acts, often over the course of years) which creates value. Most great businesses have to do with ecosystems, networking relationships of interdependence, and these aren’t based on a document – they’re based experience accumulated over time, and often highly purposefully.

Business history is littered with stories of might-have-beens, people who had great ideas but failed to get their act together. Large organizations – Xerox’s PARC innovation centre is a legendary example – are not always able to either recognize or do anything about the ideas under their noses.

We can’t invest in everything. We have to make choices – this idea, not that one. This idea now, that one maybe later. We decide what we’re going to create, what ideas we’re going to add value to by turning them into something real, something tangible.

We talk about bringing ideas to life, bringing them to fruition, giving them legs… these are all metaphors not for the eureka lightbulb moment (sidebar: the lightbulb itself took years to bring to market), but for the yeoman’s work of making something whole, and real, and functional.

So, as summer turns to fall in the northern hemisphere, what are you going to make? What are you going to assemble out of the bits and pieces of nothing-yet that surround you? Or maybe you’re going to plant something in your field and let it germinate over the long, cold winter…

If you’d like to talk about how we can help you turn your caterpillar ideas into butterflies, or your tadpole ideas into frogs, please get in touch.