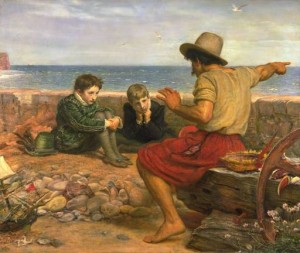 I’ve got a story for you. A senior executive at a large company was very successful. A rising star. But then he had a young child who died of a rare and horrible disease. A terrible thing.

And when that happened, what do you think his boss, the CEO of the company, did?

He sent the grieving father a note. And the note just said, “Anything you need.”

That’s it. Very simple. A profound message of support, at a tragic moment.

Now, I don’t know either of these individuals personally. And probably you don’t either. But if you work at that company, you might know this story. That’s because it’s a story that was told in front of many employees, when the senior executive was asked to comment on what it’s been like to work with that CEO.

But if you work at that company, you don’t necessarily need to have heard that exact story to recognize it in its essence. The friend who told me this story says it’s consistent with everything else she’s experienced at the company, in terms of its culture. It is about the CEO, sure, but it’s also about the company as a whole.

And let’s note that this is a huge company, in an industry that’s not exactly mercurial. Not the kind of culture that’s going to be transformed by a single big move; it’s about an overarching consistency, day after day. It comes from the top, but everyone’s got to be a part of it.

So this story is on its way to becoming folklore, part of the organization’s shared history. And that’s because it rings true. If it were a piece of disconfirming data, it would be forgotten much quicker.

There’s a great deal of discussion these days about storytelling, particularly in marketing, as a way of tapping into people’s emotions, cutting through the noise and clutter and giving us something to latch onto. And it’s certainly very powerful in that context.

But it’s also a powerful element (even if I think it’s still a bit overlooked) as a means of transmitting organizational culture. Every company, every industry, every team has its collection of stories. We use stories in hiring all the time – “Tell me about a time when you…” And we use them to figure out where to work – “What’s a typical day like here?”

But when I get together with friends our talk turns to work, past and present I don’t always hear (or tell) the inspiring stories. Sometimes we share cautionary tales. You’ve heard the same types of illustrations too, I’m sure.

The executive who took a well-supported risk – but then found herself hung out to dry. The underappreciated genius who now works for a competitor, leading them to success (or the one who’s miserably clinging to his or her job for the pay/perks/pension). The women who have kids and then find their careers mysteriously stymied, at that one particular company (the irony being that it wins awards for being a “desirable” employer). The HR leader who says his team’s main function is to make sure laws are followed, but nothing more, to resounding silence among the employees, because how inspiring is that? The senior leader who, everyone silently understands, simply should not be believed when she says that she wants to hear critiques. The change agent who lost his sponsor and saw his initiatives put on the shelf immediately.

When an organization’s stories don’t match up to its aspirations, there’s usually one or a combination of things going on:

All of these tend to politicize and personalize the organization, so the stories become about personal derring-do (or conflicts, or failures, or misfortunes), and not about the organization moving forward with its collective goals.

What are the stories you want to have told about your culture? Your leadership? Do you even know what they are now?

If you’d like to discuss how to live and tell better stories, please get in touch.