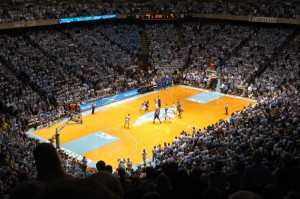 Imagine you’re going to a basketball game. The fans are in the stands, the teams assemble on the benches, the game starts… and then, not much happens. The players mill around on the court. They seem to be chatting with each other. Some pull out phones and seem to be texting. Eventually someone decides to play a bit of soccer with the basketball, the players divide into teams that don’t match their original teams, and they kick the ball around a bit.

Or imagine a scientist gets all set to run an experiment. The bunsen burners are set up, the beakers are all ready, the electron microscope is ready to go, the samples are in place. And then the scientist sits down and reads her book instead of getting started. She checks her email. Someone comes in and they start to chat about an upcoming conference.

This may sound ridiculous, but it seems to be how we often treat strategy.

At Chris Bart’s presentation on leadership at the recent Canadian Innovation Conference put on by PCMA Canada East Chapter, he said that strategies more often fail through lack of execution than anything else. I’d go a step further and say that execution and strategy are completely intertwined, so a strategy that doesn’t get executed isn’t a strategy at all. It’s just words on a page, or, worse yet, words spoken at a leadership retreat that hang in the air before fading away.

If you think of strategies as based on hypotheses, it’s like designing an experiment and then never running it. It’s like getting ready for a game that you never start playing.

When I start on strategy work with clients, I will ask to see what they’ve done in the past. What is the strategy you’ve chosen? Where is the strategic plan? The tactical plan? The reporting for the past few years? Often there’s very little to show me. Sometimes that’s exactly why we’re working together – my clients want to develop something they can use to manage their organization.

Sometimes, though, there’s a plan that was done, and implemented, but the implementation turned out to be different from what was envisioned. A new opportunity arose, or a project that required collaboration with others didn’t get off the ground, or a key staffperson left and it took some time to rebuild their connections in the industry.

People are often sheepish about showing me this kind of thing, but, really, it’s great. Scientists will tell you that they build knowledge more often by tweaking rather than huge breakthroughs.  And that tweaking only comes if you actually run an experiment and record the results. So better to see signs of a plan that was implemented in an adaptive way, than a plan that maybe wasn’t really implemented at all.

If you’d like to discuss how we can help you develop – or test out – your strategic hypotheses – please get in touch.

Photo by Anders Brownwerth from Wikipedia via Creative Commons.