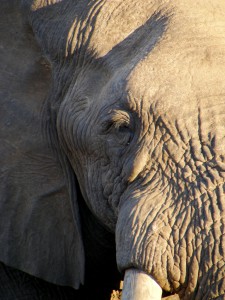 Occasionally I think to myself “Yup, this is the moment where this client gets their money’s worth on this project. Right here.”

And it’s not because of a complicated report or a big piece of research. Or – and this hurts my ego a bit to admit – a delightfully compelling piece of analysis.

It’s just because of a simple question that I ask. Something like:

Or, “Why don’t you do this other thing?”

Or, “Why do we care about what X thinks?”

Or, “Why don’t you talk about this issue?”

And that’s because, in wandering around and asking this simple question, I’ve bumped into the elephant in the room.

You can feel it in the room, when you’ve gotten to That Topic, can’t you?

Some people go very, very quiet. Even their body language stills – no more fidgeting. They might weigh in later, once the shape of the conversation is established, but they are absolutely not going first, no sirree. They may as well actually crawl under the table, which of course is what they want to do.

Others may feel defensive or attacked. They get engaged quickly, they’re fast to speak, and they sometimes want to dismiss the topic. It feels settled to them, but they also may feel vulnerable about it. Their body language might be active, but closed off – the folded arms, the dismissive tone of voice.

And others are relieved. They’ve got bright eyes, they’ve got trepidations but they’re excited. “Finally, we’re talking about this! Let’s talk about this!” These folks tend to get that slow straightening of the spine as it becomes clear that yes, we’re going to get into this, and they look around the room and they lean forward.

Of course, it can be tough to start and continue the conversation, especially with coworkers or close colleagues that we have ongoing working relationships with.

Here are some ideas to get past the hesitation and tackle the issues that are as big as an elephant and as tough as its hide.

To introduce the topic, you can ask really simple questions. Let’s look at all the activities we’re doing. Let’s think about how good we really are at them. Let’s assess whether we can really count on that person to deliver what they promised. Let’s evaluate whether that’s really working. It doesn’t have to be complicated. It does often require a followup question – especially after someone tries to minimize or bury the topic.

Take a deep breath. It’s just a conversation – it’s not even necessarily a decision.

That said, keep it as just a conversation. Usually the elephants in the room are there because someone raised it from a calf, and still feeds it every day. We get attached to our elephants, and often for reasons that others don’t understand. Stay respectful, but keep the discussion moving forward. The phrase “Help me understand” is unbelievably useful.

Talk about it in terms of tradeoffs. If you’re investing a lot in one thing (time, money, goodwill, political capital, real estate on your website), it means you aren’t investing in other things. You can frame it as a check in – just imagine you weren’t doing X, and you could do Y instead. Does that sound better to you? If so, maybe you need to talk more about that.

Recognize you might have to have more than one conversation about it. In fact, that’s the goal. If it’s an important issue for your organization, of course you’ll have to talk about it again. You don’t usually have to get everything resolved instantly. Just keep it on the agenda and come back at it next time.

Let’s talk about how to talk about the stuff we don’t want to talk about. Those are so often the things keeping us from greater success. Please feel free to get in touch if we can help you with that.