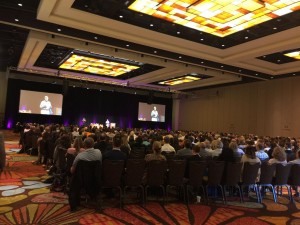 I just got back from the absolutely fabulous ASAE Great Ideas 2015 Conference in Orlando, and thought I’d share my first, fast takeaways – the things that will be rolling around in my head for the next few months. Not all of them are new, but all of them got at least underlined for me these past few days. (This week I’m sharing the content takeaways – later on, I will be blogging some thoughts on the format.)

So, aside from a bit of vitamin D from the Florida sunshine, what did I absorb?

What is the problem? Do we know for sure this is really a problem? (Maybe only a couple of people think it’s a problem – does that make it a problem for the whole organization?) In an evidence-based decision-making session, where we talked about the process of doing analytics to understand a problem, this was a terrifically useful idea. Nobody has enough resources. So why solve a problem, without any filter as to whether it’s a real problem? Or without a sense of which problem exactly you’re going to try to solve? It’s hard to stay in this analytical mindset rather than jump to a solution – especially in a service-oriented culture – but it’s crucial.

2/ If an association is about creating a network, then think about the network in terms of the internal and external value created.

The internal value is that which members themselves are willing to contribute – through dues, event fees, or any other offering that entices them to spend some money. The external value is that which non-members are willing to pay to get some benefit from this network that’s been created: sponsorship, repackaging of data, advertising, consulting, or anything else. This construction gets us away from dues vs. non-dues revenue, which I think is a pretty unhelpful distinction. This came up at a session run by Erin Fuller of Coulters, and Dean West of Association Laboratory, which all on its own may well have justified a huge chunk of the cost of the conference. (I think I’ll be playing with this notion in future… a nice example of framing differently.)

3/ It’s not that failure happens – it’s that it’s good to talk about it.

There were some delightfully candid sessions – and questions – where association executives talked about where they tried something, and it just straight-up failed. Yes, they generally talked about the next thing they tried, which succeeded, but not always. It seemed that the willingness to disclose what hadn’t worked helped clarify why those things that had eventually did work, worked.

4/ There’s a lot of interest in innovation, but…

…not necessarily a lot of clarity about why to innovate, or what a successful innovation looks and feels like. It’s not always clear what problem is supposed to be solved by a given innovation – or what impact it’s expected to have. Martha Malone from the Industrial Research Institute talked about the Outcome-Driven Innovation framework, which is a process by which you first analyze what your members are trying to accomplish – then, and only then, do you think about what you might offer to them. Throughout the event, as I listened to the stories of good ideas gone bad (or bad ideas let loose into the world), I thought that this issue could help explain some of these failures – not thinking it through, systematically, from the perspective of our members, our clients, our partners, and not letting those perspectives define the metrics of success.

And maybe that’s also why there’s an abiding fear of failure – because we haven’t articulated well enough what success even looks like.

The opening keynote was by Alan Gregerman, who talked about the importance of talking to strangers; getting to know new people, and precisely because they are “strange.” They know things we don’t, they can teach us things we need to learn.

And then the whole event proved Alan correct, by giving us all sorts of opportunities to talk our issues through with people we’ve never met before, and see that value unfold.

Many thanks to all the organizers, speakers, and, maybe most of all, attendees, who made this such a great co-created experience.

Photo of Alan Gregerman’s presentation is my own.