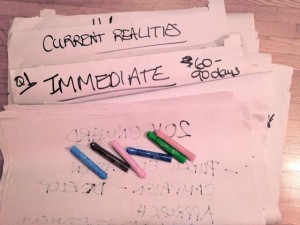 Really, it doesn’t get a lot more awkward than a facilitated session that goes sideways. I was talking with a friend at dinner the other night about a strategic planning session she was part of, which had gone so badly that both the CEO and the President of the Board had tried to step in and take over the meeting from the facilitator. Participants weren’t clear on what they were being expected to do, and the evaluations were pretty harsh.

Facilitation is a strange business, to be sure. It’s a skill that’s incredibly difficult to assess in advance. It’s challenging to teach, and even more so to learn. It requires us to do real-time scenario planning, while retaining a complete focus on the moment – a combination of chess master and zen master – all in front of a collected group of people, in real time. Often there has been a great deal of buildup leading to the event, and a large investment of time and money to gather people together. It’s a high pressure moment, but one that requires a clear head.

I was lucky enough to get both skilled training early in my career, as well as ongoing coaching and feedback as I practiced. I was also fortunate in that at one point my job title was “facilitator” – I don’t know if I got the 10,000 hours that Malcolm Gladwell popularized as the threshold for getting great at a skill, but I did get many chances to facilitate early in my career, with a variety of audiences.

My conversation with my friend reminded me of just how much trust my clients put in me when I facilitate a session. A session that’s going badly can indeed be very difficult to salvage (ask me how I know!). On the flip side, a facilitated session can result in a stronger group, a situation resolved, a difficulty addressed, and general rejoicing. (Or, at least a clear plan.)

What can we do – facilitators and clients alike – to make it more likely that a facilitated session will go well?

So, as a facilitator, you just have to roll with it, and – on the fly – assess what the most useful and effective methods for that group, with those objectives, are, in that moment.

There’s a jargon-y phrase that I’ve carried around with me for a couple of decades now – honour where the group is at. (Thanks, Beth, wherever you may be now!)

It works whether I’m working with a group of mining executives or railroad engineers or finance managers or rowdy teenagers. The group is where it is, and as a facilitator all I can do is work with that. We can do great things together, but not if I’m trying to turn the group into something it’s not, or pretend the group has skills or knowledge it doesn’t, or if the group just isn’t ready to make a particular decision.

If you’d like to talk about how your group can benefit from facilitation, please get in touch.